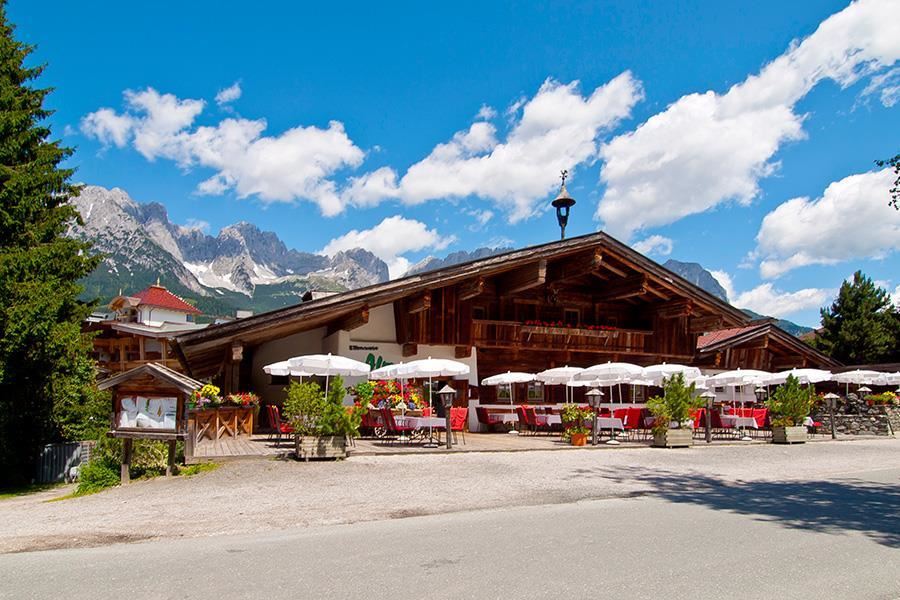 The Ellmauer Alm is the highlight in the Ellmauer Aprés Ski with real Tyrolean hospitality in an original old wooden room! In winter, the "Alm" is open daily until late into the night - with live music every day. In the summer months Wednesday is our day of rest.
Beside Aprés Ski the Ellmauer Alm is a rustic restaurant (240 seats) with a large selection of local delicacies.
The Ellmauer Alm is located directly behind the Sporthotel Ellmau at the valley station of the Vetterstätterlift. At the end of a long ski day you reach the Alm directly with your skis and can end the day on the huge sun terrace (120 seats).

The Ellmauer Alm is perhaps familiar to you from the film recordings "Christmas with Marianne and Michael" or currently the Christmas programmes of "Sing meine Song" or "Songs für die Ewigkeit".

Your family Unterlechner with team is looking forward to your stay.

You can find us on these routes

A tour of the main filming locations of the TV series “Der Bergdoktor” (The Mountain Doctor) in Ellmau and Going, with a refreshment stop at the inn used during filming

Going church square - Bergdoktor practice Ellmau and Gruberhof Söll. This e-bike tour gives you a chance to enjoy the magnificent mountain panorama at the foot of the Wilder Kaiser and takes you past...